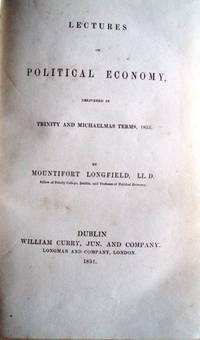 Lectures on Political Economy, delivered in Trinity and Michaelmas Terms, 1833.

Lectures on Political Economy, delivered in Trinity and Michaelmas Terms, 1833.

FIRST EDITION by Samuel Mountifort Longfield, who was Ireland's first Professor of the Whateley Chair of Political Economy at Trinity College, Dublin.

"Longfield's general theory of value is noteworthy in that he not only puts very lucidly the influence of cost of production upon the supply side of the equation between supply and demand, but calls attention to the demand side as well...Longfield uses profits in the sense of general returns to capital, and that his theory of profits is really a theory of interest...In his theory of wages also he marks a decided advance...'the wages of the labourer depend upon the value of his labour, and not upon his wants, whether natural or acquired.'" Seligman

"Longfield's Lectures is an amazingly original if somewhat confusingly written book, which sketches a subjective theory of value and a marginal productivity theory – all this in 1834, 11 years after the death of Ricardo. Longfield had the idea of marginal demand price and favoured utility rather than labour as the basis of exchange value but he failed, like everyone before him, to discover the concept of marginal utility as the link between utility and demand." Blaug

"Longfield's merits may be summed up by saying he overhauled the whole of economic theory and produced a system that would have stood up well in 1890....his argument against the labour theory of value is one of the best ever penned...he anticipated the essentials of Bohm-Bawerk's theory (by making the 'roundabout' process of production the pivot of his analysis of capital). And he presented a reasonably complete and reasonably correct theory of distribution based upon the marginal productivity principle, not only the marginal cost principle..." Schumpeter.

Cloth
"Cloth-bound" generally refers to a hardcover book with cloth covering the outside of the book covers. The cloth is stretched...[more]
half title
The blank front page which appears just prior to the title page, and typically contains only the title of the book, although, at...[more]