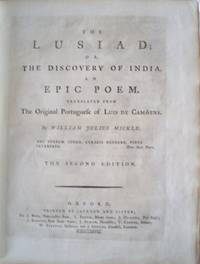 The Lusiad; or, the Discovery of India. An Epic Poem. Translated from the Original Portugese of Luis de Camöens. The Second Edition

The Lusiad; or, the Discovery of India. An Epic Poem. Translated from the Original Portugese of Luis de Camöens. The Second Edition

Second edition, but the first to contain this critical attack on Adam Smith’s laissez-faire doctrines to the East India Trade in the Wealth of Nations. The long criticism appears on pages clxi-clxxxvi and begins; "Of the example of Portugese Asia cannot be better enforced by an examination of the popular arguments relative to the British commerce with India. A recent Writer on the Nature and Causes of the Wealth of Nations, has stood forth as the philosophical champion for the abolition of the Monopoly of the English United East India Company…"

Mickle, a Scottish poet and translator of Camöens epic verse, dedicated The Lusiad to Adam Smith’s pupil the Duke of Buccleuch, who apparently said that it had not the merit it had been presented to him as having.

Viner writes "Mickle’s criticism of Adam Smith’s economics was not limited to Smith’s specific applications of his general laissez-faire and free competition doctrines to the East India Company issue, but included a frontal attack on these doctrines themselves…It was not Smith’s custom publicly to acknowledge, still less, formally to reply to, or to make explicit concessions to, adverse criticism of himself or his writings, and he seems never publicly to have referred to Mickle. Although in the third edition (1784) of The Wealth of Nations he introduced new material on the East India Company and its history which was on the whole even more critical than his original attack on the Company…"

edges
The collective of the top, fore and bottom edges of the text block of the book, being that part of the edges of the pages of a...[more]
rebacked
having had the material covering the spine replaced. ...[more]
morocco
Morocco is a style of leather book binding that is usually made with goatskin, as it is durable and easy to dye. (see also...[more]
New
A new book is a book previously not circulated to a buyer. Although a new book is typically free of any faults or defects,...[more]
calf
Calf or calf hide is a common form of leather binding.  Calf binding is naturally a light brown but there are ways to treat...[more]