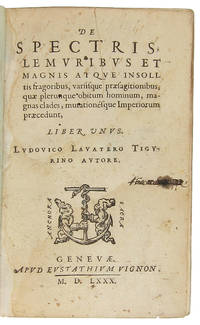 Early Latin edition, after the first edition, in German, of 1569 and the first Latin edition of 1570. Known in English as “Of Ghostes and Spirites Walking by Nyght, and of Strange Noyses, Crackes, and Sundry Forewarnings, Whiche Commonly Happen Before the Death of Menne, Great Slaughters, & Alterations of Kyngdomes,” from the 1572 English translation, this book is one of the most important demonological works of the Reformation era and was profoundly influential in Elizabethan literature. The author, Ludwig Lavater (1527-1886), was a Swiss Zwinglian minister and theologian based in Zurich. In the 16th and 17th-century Protestant world, new questions surfaced regarding the nature of ghostly apparitions—particularly their origins. In the Catholic understanding, ghosts were generally thought to be spirits of the dead on leave from Purgatory. With their rejection of the doctrine of Purgatory, Protestant philosophers and theologians were compelled to search for new answers. One (fairly unpopular) position was taken by Reginald Scot in his DISCOURSE UPON DEVILS AND SPIRITS, appended to his 1584 work, DISCOVERIE OF WITCHCRAFT, in which he argued that because the age of miracles had ceased long ago apparitions must be no more than the products of human imagination or trickery. The dominant view in Protestant theology (if still not quite the popular mind), however, came to be what Lavater expressed here in DE SPECTRIS. Lavater argued that, while many apparitions may be indeed be products of false perception, ample evidence of real supernatural visitations had existed from biblical and classical antiquity to the present day. He concluded, however, that these phenomena are not the spirits of the dead but in fact agents of Hell (and perhaps occasionally Heaven) that will sometimes take human spiritual form. He relates examples of these phenomena throughout the work, together with a taxonomy of less-human specters such as Lamiae, Larvae, and Lemures and a variety of mythical creatures. In his introduction to the 1929 Oxford edition of GHOSTES AND SPIRITES (edited with May Yardley), J. Dover Wilson demonstrates the clear influence of Lavater’s views—and possibly of his book, directly—on Shakespeare in the shaping of the dialogues surrounding the ghost of Hamlet’s father. In TAMMUZ PAN AND CHIRST : NOTES ON A TYPICAL CASE OF MYTH-TRANSFERENCE AND DEVELOPMENT (Chicago, 1912), Wilfred H. Schoff discusses the influence of Lavater’s “strange compilation of wonder stories” on the Elizabethans and traces the path of the “Dead Pan” story in English literature from DE SPECTRIS through Spencer, Milton, and Elizabeth Barrett Browning. Caillet 6237 ("curieux et rare"). Dorbon-Ainé 2509 (first edition). Graesse, pp. 81, 134. Rosenthal 1885. Thorndike VI, pp. 530-32.

Marbled boards
...[more]
New
A new book is a book previously not circulated to a buyer. Although a new book is typically free of any faults or defects,...[more]
leaves
Very generally, "leaves" refers to the pages of a book, as in the common phrase, "loose-leaf pages." A leaf is a single sheet...[more]
First Edition
In book collecting, the first edition is the earliest published form of a book. A book may have more than one first edition in...[more]
title page
A page at the front of a book which may contain the title of the book, any subtitles, the authors, contributors, editors, the...[more]