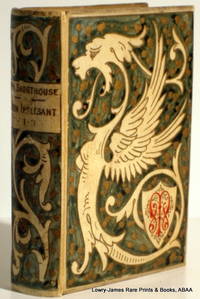 After serving as an apprentice to his uncle Karl Tauchnitz, an eminent printer-publisher who had introduced stereotyping to Germany, twenty-year-old Christian Bernhard Tauchnitz founded Tauchnitz publishing firm in 1837. Quite early, Christian decided specialize in publishing editions in foreign languages, particularly English. The German publisher introduced the first volume of the Tauchnitz Collection of British Authors in 1842 and went on the produced some 5,370 volumes of the series over the next 100 years. In 1914, the name of the series was extended to include British and American Authors, though it contained the works of many Americans from as early as volume 15.

When the Collection of British Authors series was first launched, there was no recognized international copyright convention, which made it not uncommon for English language novels to be published in Europe without any payment to the author. However, Tauchnitz realized the potential profit that could be made by obtaining explicit authorization from authors in return for payment. In the summer of 1843, Tauchnitz presented one of the earliest copyright proposals, which was initially accepted by G.P.R. James, Bulwer Lytton, and Lady Blessington and later by Charles Dickens, Benjamin Disraeli, Ainsworth, Samuel Warren and Captain Marryat. Works by these authors and a few others appeared in the Tauchnitz series as editions “sanctioned by the author” over the next three years. Tauchnitz’s revolutionary step paved the way for international copyright protection and was followed by establishment through the 1846 Anglo-German treaty. As a direct result, the treaty protected Tauchnitz editions from piracy by other publishers.

These events helped Tauchnitz to establish and maintain close relationships with many of the leading British and American authors. In Britain, many different publishing houses published these authors and the first editions of their novels appear in a huge variety of different formats. However, Tauchnitz acquired the continental publishing rights for almost all its leading authors from 1840 to 1940. In a number of recorded cases, and no doubt many unrecorded ones, the Tauchnitz editions were published slightly in advance of the UK editions, making them the true worldwide first edition. Furthermore, the firm soon became the principal publisher of English language books in continental Europe. The 1000th volume of its main series was published in 1869, the 2000th in 1881, and the 3000th in 1895, before the death of the first Baron Tauchnitz. His son, Christian Karl Bernhard Tauchnitz inherited the firm.

The second Baron Tauchnitz brought in Dr. Curt Otto as a partner and later, general manager. The firm continued to publish throughout WWI, generally retaining its pre-eminent position in English language publishing in continental Europe, though it was no longer the force that it had been in the 19th century. The second Baron Tauchnitz died in 1921, leaving Curt Otto as the sole owner of the business, and when he too died in 1929, the firm was reorganized as a limited stock company under the management of Max Christian Wegner. In 1932, Wegner launched The Albatross Modern Continental Library, which was intended as a more modern approach to the continental publication of the major English language authors. But until the start of the Second World War, the Albatross and Tauchnitz series were run in parallel.

The war between Britain and Germany again left Tauchnitz in a near impossible position. From 1940 to 1943, just one book a year was added to the Collection of British Authors, with the final volume being a novel by P.G. Wodehouse, written in a German internment camp. After 101 years, the series was forced to an end as a result of destruction from an allied bombing raid in December 1943. There were a number of attempts to revive the Tauchnitz name and tradition after the war with the establishment of new series, but none of them had much success. The final book published under the Tauchnitz imprint appeared in 1955, although new wrappers seem to have continued to be applied to old stock through into the early 1960s.

It is incredibly difficult to identify a first edition from Tauchnitz as the publisher followed the unusual practice of retaining the first printing date on the title page of later printings, with no indication of the date of actual printing.